DeWalt Power tools has a long history as far back as 1922 when Raymond DeWalt, then superintendent of Seabrook Farms, perfected the first woodworking machine for the purpose of increasing productivity and versatility. In 1924 DeWalt Products Company was formed with its plant and offices located in Leola, Pennsylvania. Their product was an electric universal woodworking machine known as the DeWalt “Wonder-Worker,” which could be configured in 9 different ways. DeWalt also offered a dedicated mortiser and jointer. In 1929 the company moved to a new location in Lancaster, Pennsylvania which at that time was considered to be a leading edge manufacturing facility. 1941 was start of the boom with government contracts preparing for war times. 1947 was the official year of the birth of what we know today as  DeWalt Inc. and since then well the rest is shall we say history. 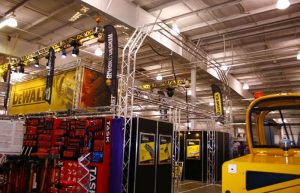 DeWalt does not do anything in a small way from their manufacturing facilities, and top of the line tools to yes even their trade show booths.

DeWalt wanted something spectacular to show off there ever growing tool lineup and VersaTruss was contacted to meet the challenge.

Initial discovery discussions took place to brainstorm the structure that would be required. It had to incorporate a large footprint with two levels, the first level was to be the new home for the tool display, and the second level was for signage that could be seen from a long distance. Because any type of tooling is heavy, the structure also had to be capable to handle the weight of the tools.

VersaTruss went to work, and created this multi-level, multi-dimensional truss structure to meet there needs. The structure is modular so assembly and dis-assembly is a snap. Each component can easily be handled by one person for assembly.

Signage, lighting, monitors and tool hangers can be mounted just about anywhere as well as the wall panels.