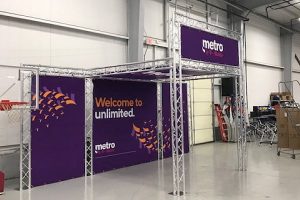 The Metro T Mobile customer base has more than doubled in the past 5 years for one reason and one reason only, it is by far the best value and best experience in the prepaid cell phone mobile category. Metro T Mobile was frustrated because literally millions of hard-working people were struggling to get by, yet felt stuck with other larger service providers because they thought prepaid wireless was subpar.

In the past, being a prepaid customer meant subpar devices, service and coverage. No more. Metro has been quietly changing the prepaid landscape for years, and wireless users have noticed and are now speaking out.

Now when a company like Metro T Mobile decides to think outside of the box and change things, cause a disruption in the standard way of societies thinking, how do they go about it. Well there is literally thousands of possibilities available today to get the word out, change the way people think. Now with all of these options available, there is one that every company does and has done in the past and always will do to force a shift in societies way of thinking. This is all comes down to one thing, they need to get physically in front of people. Sure social media, news and advertisements help, but you still need to get in peoples face to force a change.

This is where the VersaTruss trade show booth and kiosk system comes into play. The VersaTruss modular display truss system offers a portable, lightweight solution for this type of promotional activity. A great example of this was the concert series that Metro T promoted throughout the US partnered with Pandora featuring   Cardi B and Kehlani. These concerts were held in Night Clubs in major cities throughout the US. The tickets were free, this was strictly a promotional move on the part of Metro Mobile T. The kiosk shown above attended all these shows, the display itself promoted the new vision that Metro T was offering in the mobile cell phone industry. This kiosk also housed hands on examples of the phones that were being offered. As mentioned above, Metro T Mobile doubled their customer base in 5 years, that’s an incredible success story and VersaTruss is proud to be part of this unbelievable legacy.