After a brief discussion with promotional team at “Straight Talk Wireless” we as a team at VersaTruss new we could help.

It all starts with a vision and with a nationwide collective of frustrated wireless customers on the horizon, Straight Talk Wireless was positioning themselves to provide a viable solution.

Straight Talk Wireless was launched in 2009 and it is one of several brands owned by Carlos Slim, founder of América Móvil, a Mexican telecommunications corporation.  América Móvil is the company behind TracFone and Straight Talk Wireless is considered a TracFone brand. The wireless solution that Carlos provided in the past that the US local providers fought to keep it out of the country. 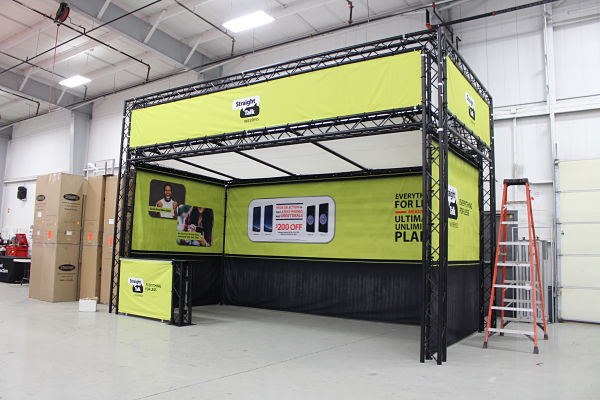 Straight Talk provides cellular service through all 4 major wireless providers in the USA which include AT&T, Sprint, T-Mobile and Verizon.   Data speeds are the same as the parent networks.

Straight Talk Wireless fully supports those that have their own device to bring to the network.  AT&T, T-Mobile, Sprint and Verizon phones are all compatible as long as they are not under contract and have no financial obligations on them.  Universally unlocked phones from manufacturer’s such as Motorola and Samsung are also compatible with the network.

But where there is a change on the horizon and a promotional need, you are now in the realm of the VersaTruss lightweight portable display truss system.

The Straight Talk Wireless team wanted something simple, clean and not overwhelming. They needed a display booth that would not overwhelm potential clients.

The solution was this beautiful 10’ x 20’ black powder coated double level truss structure. The lower frame lends itself perfectly for the main promotional banners. The addition of an upper banner structure provides the perfect layout for the main logo and name.  In addition, cross members were added to support a sheer cover so the booth can be used inside or out. The banner color coordination was intentionally kept low key to attract a wide range of potential customers without intimidation.

This booth proved to be so incredibly successful that more were ordered and more orders are on their way.