Racing in the future could look a lot more like Star Wars than Days of Thunder and VersaTruss was there to help.

With that in mind, Dover International Speedway has become the first NASCAR race track to try and find a way to capitalize on it.

While there won’t be a crystal ball placed in the Fan Zone at Dover, the track just might have presented fans with a sneak peek into the future of racing during NASCAR’s tripleheader held on June 2-4 when it hosted the International Drone Racing Association.

The Monster Mile, which has hosted motorsports and harness racing since its opening in 1969, has partnered with the IDRA and held a free event that served as the first race of the 2017 IDRA Drone Racing Series. The International Drone Racing Association (IDRA) had announced a new partnership with Dover (Del.) International Speedway earlier this year. The IDRA held its USA event at the track famously known as “The Monster Mile” on June 2-4, 2017, in conjunction with their NASCAR tripleheader race weekend. The event was free and open to the public to watch in Dover’s Fan Zone. 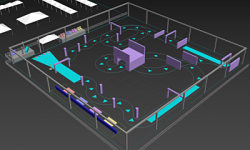 The race featured 16 professional teams from around the world, competing to earn points toward the World Championship. The three-year agreement provides IDRA with the opportunity to showcase the growing sport of drone racing in Dover during its spring event weekend.

VersaTruss was proud to be a part of this new and exciting sporting event providing the aluminum truss structure that housed this fast-paced thrilling event. As seen to the left, the perimeter of the race zone was 150’ “feet” square providing a total event space of 22500 square feet.

The truss for this application used a 2” four cord design with cross wedding providing more than enough support for this application.  Netting was suspended over the total structure insuring no drones could accidently leave the arena this was not only to save the drones but provide safety for eager patrons.

As always, the VersaTruss product line lends it exceptionally well to this type of application. Its modular design will give event promotors the freedom to enlarge the race arena at any given time. The truss itself is exceptionally strong yet lightweight which ensures that the arena can be assembled and disassembled quickly and more importantly moved if required. In addition to the inherent characteristics of the truss that make it perfect for both large and small perimeter applications, custom structures make for great obstacles for the race itself.

When it comes to Exhibit and Display Truss, nobody does it better than VersaTruss