Directing patrons into large stadiums can be a troublesome task at the best of times. The Levi Stadium is no exception. 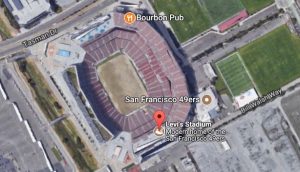 The Levi’s Stadium is a football stadium located in Santa Clara, California, in the San Francisco Bay Area. It has served as the home of the San Francisco 49ers of the National Football League since 2014. The stadium is located approximately 40 miles (64 km) from San Francisco and is named for Levi Strauss & Co., which purchased naming rights in 2013.

The stadium itself is a state of the art sporting facility with all the bells and whistles to enhance the experience of wanting patrons including sporting expansive parking lots.

With these incredible options, the facility itself had one weakness. As much as the facility had large parking lots, incoming football enthusiasts would end up in the wrong parking lot or stroll through the wrong pathway to get the entrance closest to there seats.

Well with a quick call, Versa Truss came to the rescue. It seemed that patrons would simply park their car and wander into onto the grounds of the Levi’s Stadium in many cases ending up considerable distances from their desired entrance and seating simply from lack of guidance.

Further, signage opportunities were limited throughout the parking lots and facility entrances. Versa Truss worked with the stadium Management Team and came up with a solution. Six truss structures were build, five of which were 22’ high by 36’ wide and the sixth 22’ high and 44’ wide. Each structure was fabricated from the patent four cord modular truss system that Versa Truss manufactures.

Versa Truss is renown for their patent exceptional aluminum truss systems and capability. Each main cord is a full 2” in diameter giving each singular upright a total of four 2” lengths with cross-webbing for superior support. These structures can withstand extreme weather conditions including wind, heat, cold, rain, snow and more. They can be portable or permanent depending on the anchoring system that is applied. 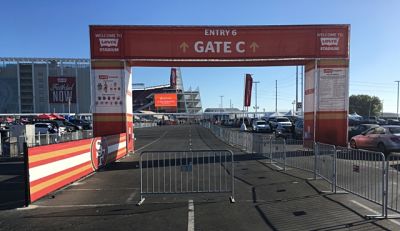 The photo to the left depicts the 44’ archway that was installed on Gate C at the stadium. After looking at your ticket, there is no doubt which gate is the correct gate. Further, the stadium name is clear with additional information about the stadium and security requirements. Not only have these archways virtually eliminated directional concerns but questions that were typically asked of the parking lot attendants and exterior stadium personnel have been reduced to nil.

When it comes to Exhibit and Display Truss, nobody does it better than VersaTruss