Mopar has been a long-time partner with VersaTruss. It’s been a partnership that has positioned VersaTruss to flex their creative muscle on numerous occasions.

For those that are not familiar with Mopar, they are the parts, service and customer care organization within the Fiat Chrysler Automobile Organization.

Creativity is the name of the game and VersaTruss has come to the table each and every time working with the team at Mopar designing in some cases elaborate displays, while in others more simple structures for example the display in the photo below. 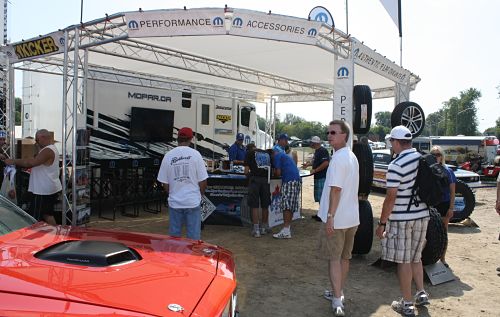 This particular structure had to be easily assembled and disassembled while having the ability to be transported in a small truck. The strategy behind this somewhat smaller display compared to Mopars standard outward face was that they were looking to get closer to their customers at smaller auto shows and local races. It was a get involved in the community theme.

From a structure point of view, additional requirements were that it had to have the capability to withstand the elements and be lightweight, all characteristics that the Versatruss modular display system inherently lends itself to by nature.

From a setup point of view, the Mopar team pulls up to their display footprint and parks the truck. The display sections are pulled out of the back of the truck and erected in such a way that the truck itself is part of the display. An added benefit of this arrangement is that the truck can leave at the end of the day, leaving the balance of the exhibit behind ready for the next day.