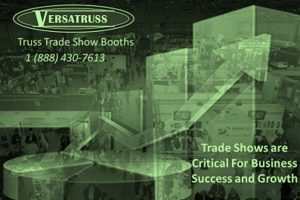 The need for Companies and Corporate Identities alike to have a public front at trade shows, conventions and expos has increased to the point that it is almost success suicide if they choose not to participate in public exhibitions.

The public wants and expects to see the things they are interested in on display and available at trade shows and can quickly lose confidence in an organization if they are expected to be at a show and shrug it off.

Social Media provides some support and exposure, but when it comes to business growth and sustainability, overwhelming competition has put the trade show experience back in the limelight.

Trade shows have evolved over the years from a basic show and tell opportunity to a hands on product confidence builder and company branding opportunity. The days of having a shabby exhibit are long gone and the public will harshly judge an organization on their presentation. Thus the incredible growth in the aluminum truss trade show booth industry.

Lets take a step back and look at some overall stats in the Trade Show Industry:

Overall the average number of people per one hundred square feet of exhibit space at trade shows across the US increased to an all-time high in 2018 /19 to 2.7. This number may seem insignificant at first glance however if you think about the total purchasing power of this increase and take a look at the next two statistics that represent the growth of potential buyers and people attending trade shows with the authority to spend funds, the number all of a sudden becomes incredibly substantial.

In 2018 / 19, we saw the highest percentage of people attending trade shows with the intention of purchasing one or more items since the beginning of the trade show industry. A whopping 58% of patrons in 2018 /19 had full intentions of purchasing  a product within the next 12 months that they had seen at a trade show. This is a sign of the slow but sure increased stability in the economy and the confidence of the general public.

Now here is the stat that caused all the stir in 2018 and into 2019. The percentage of trade show attendees that had the authority to spend funds hit an all-time exclusive high and we are forecasting this number to stay firm for 2020. During the year the number of people who had the power to spend increased to an incredible 85% which is a number that has never been seen in the trade show industry.

Now if you take into account the increase in spending authority, the increase of the intention to spend funds, the average number of people per 100 square feet at trade shows becomes a substantial number worth investing some time to understand.

Before we move further into individual stats, we need to take a look at one more important number that defines the value of trade shows and how the economy plays a key factor in the in the attendance and success of both exhibits and companies and that is the addition of new attendees. During to year of 2019 we saw an increase of new attendees to 39%. What this means for the exhibitor is that on average out of every 100 people that pass their booth, 39 of them are new to your products or services meaning you have a huge opportunity to gain new business and develop new relationships.

When we look at the average number of hours that people spend at individual trade shows, we also see an increase. This increase is caused by a number of factors, first and foremost, the ecommerce world is growing at an alarming rate which means companies need to put an outward face on their promotional activities to allow them to be noticed and singled out among the thousands of companies that are listed under the internet search terms. It is critical that people are not only looking for a product but a company name also. Secondly exhibits are becoming more extravagant and appealing. It is no longer acceptable to have a back board and a table to present your services, the public is expecting a structure, comfort and proper floor space for discussions and potential dealings. In addition, professional graphics, monitors and effects are simply expected and it requires imagination to stay a step ahead of your competition.

The final statistic is based on the number of people that could actually remember a particular exhibit meaning that it left a lasting impression. Since 2010, this number has steadily increased from 67% of people that were left with a lasting impression from a particular exhibit to 83% in 2019. This is a substantial increase in product branding and public awareness. The credit for this increase can only be given to the exhibitors themselves. Over the years, exhibitors have realized the importance of having a professional display structure that is organized, displays their products in a professional attractive manner using not only the products themselves, but multimedia, video and demonstrations.

With the overwhelming growth in the Trade Show business and the highly competitive nature in all categories of trade, VersaTruss can offer you the leading edge with one of our Aluminum Truss Trade Show Booths or Structures. You have the ability to choose from one of our pre-fabricated kits or have us custom create your vision. Aluminum Truss Trade Show Booths offer flexibility, versatility and an instant professional face for your exhibit needs.